We just started doing trolling trips this past weekend as we had rescheduled many of our charters due to lack of stripers in the Delaware Bay the last few weeks. We did this because most of our charters prefer chunking over trolling but we decided to turn to trolling with the absence of a Delaware Bay chunk bite this past weekend. We started out slow on our first two trips last Friday and Saturday but managed a real good trip on Sunday with more stripers showing up locally now.

We have been running north about 20 miles on our last few trips as that is the best local location we know of holding stripers unless you are fishing out beyond the 3 mile limit which we never do. By far the very best fishing within the 3 mile limit this past weekend was up off Atlantic City which is no big secret and it looks like some of this great fishing is going to be happening more to the south closer to Cape May now. If we hear of any striper being caught in the bay chunking we will offer all our customers the option of doing this versus trolling but again at this time trolling is the ticket with jigging a possibility also.

It is not looking good for chunking the bay as of this morning, but possibly the strong South and NE winds will bring some stripers from up north down closer to Cape May and some will see the chunk bite take off like it did for us the first week of December last year. Right now there are still large schools of stripers from Long Beach Island to AC and they should be moving south and should provide some excellent striper fishing for boats out of South Jersey well into December. Last fall we had some great trolling trips in December as the stripers took up residence on the hills and lumps off Sea Isle and Stone Harbor. I have heard the striper bite turned on at one of these locations this past Sunday in the afternoon which is really good news as it is much closer to Cape May. So far we have not seen many sand eels in our local waters as all the stripers we have caught are feeding on mostly on bunker. We are currently trolling lures that imitate bunker but we are going to try some sand eel lures on today’s trip just to experiment.

If you want to fish in comfort on those cold and rough December days we have one of the very best charter boats that can handle December weather. Last Friday when we fished in 30 knot winds and temperatures in the 30’s and overall our customers were very comfortable on the Hooked Up II. We ran home with a head sea at 22 knots without any pounding and not many charter boats can provide this type of speed and comfort in these conditions. You pay a little more to fish on the Hooked Up II well worth it especially on those cold windy December days when striper fishing.

PS: I have reports of stripers being caught late Sunday afternoon at a couple different locations with one boat catching and releasing over 25 quality fish not far from where we fished on Sunday morning well south of Atlantic City. It looks like we may see the striper bite break wide open for the Cape May boats closer to Cape May and the best news is all these fish were caught within the 3 miles line.

*****UPDATE – This update covers Tuesday morning striper fishing.  Today (Tuesday) we were went out on a 6 hour striper trip.  Since we were time limited we stayed closer to Cape May, but didn’t get any fish.  We only saw 1 fish caught out of the 12 or so boats around us.  The fishing is still much better up North of Cape May from where we fished today and it seems the fish are biting better in the afternoon.  Unfortunately with the short charter window, we weren’t able to fish the afternoon bite.  *****

Here are some pictures of some of our anglers from this past weekend catching their first stripers! 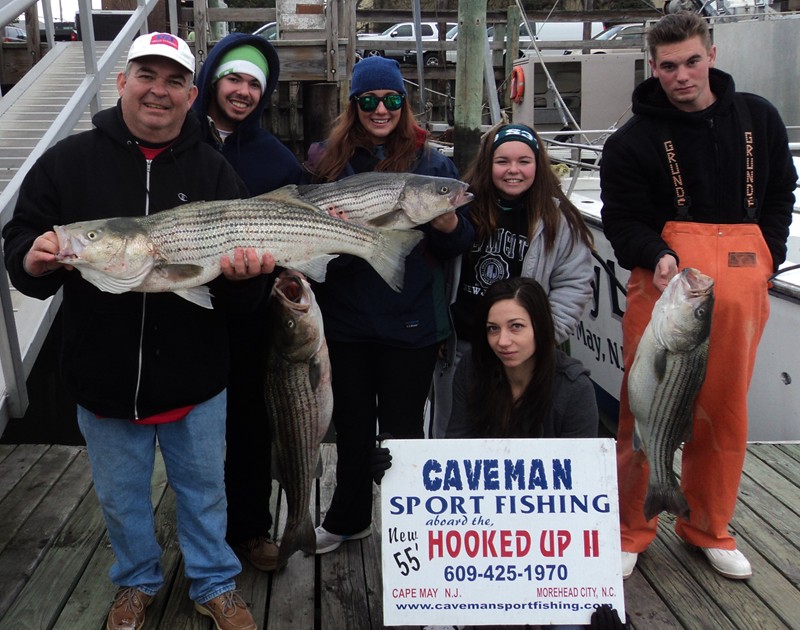